A Message from a Native American Wisdom Keeper

A Message from a Native American Wisdom Keeper 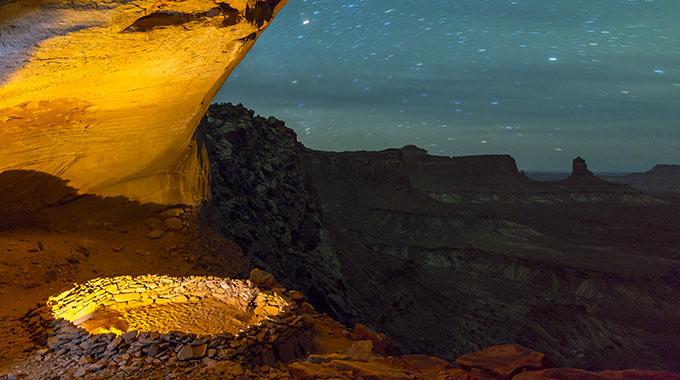 The last thing I expected to see on a late October afternoon hiking in a remote canyon of the Four Corners area in northwestern New Mexico was a Native American wisdom keeper walking toward me on the same trail. Yet there he was, standing at the top of the small incline that separated us as our paths converged that day.   I’m not sure how long he’d been there. By the time I saw him, he was just waiting, watching me as I stepped carefully among the loose stones on the path. The low sun created a glow that cast a deep shadow across the man’s body. As I held my hand up to block the light from my eyes, I could seea few locks of shoulder-length hair blowing across his face.

He seemed as surprised to see me as I was to see him.The wind carried the sound of his voice toward me as he cupped his hands on either side of his mouth.

“Hello,” I called back. “I didn’t expect to see anyone here this time of day.” Stepping a little closer, I asked, “How long have you been watching me?”

“Not long,” he replied. “I come here to listen to the voices of my ancestors in those caves,” he said, as one arm pointed toward the other side of the canyon.

The path we were following wound through a series of archaeological sites built nearly 11 centuries before by a mysterious clan of people. No one knows where they came from or who they were.

With no evidence of their skills evolving over time, the people that modern natives simply call “the ancient ones” showed up one day in history and brought with them the most advanced technology that would be seen in North America for another thousand years.

From the four-story-tall buildings and perfect stone kivas (round ceremonial structures) buried in the ground to the vast irrigation systems and the sophisticated crops that sustained the people, this place seems to have just appeared one day. And then those who built it were suddenly gone.

The ancient ones left precious few clues to tell us who they were. With the exception of the rock art on the canyon walls, no written records have ever been found. There are no sites of mass burials or cremations, or weapons of war.

Yet the evidence of their existence is there: hundreds of ancient dwellings in an 11-mile-long, 1-mile-wide canyon in the remote corner of a desolate canyon in northwestern New Mexico.

I’ve gone to this place often to walk, immerse myself in the strange beauty of the open desolation, and feel the past. On that late October afternoon, both the wisdom keeper and I had come to the high desert on the same day for the same reason. As we exchanged our beliefs about the secrets still held there, my new friend shared a story.

“A long time ago, our world was very different from the way we see it today,” the wisdom keeper began.

“There were fewer people, and we lived closer to the land. People knew the language of the rain, the crops, and the Great Creator. They even knew how to speak to the stars and the sky people.

“They were aware that life is sacred and comes from the marriage between Mother Earth and Father Sky. In this time, there was balance and people were happy.”

Remembering The Gifts From Our Ancestors

I felt something very ancient well up inside of me as I heard the man’s peaceful voice echo against the sandstone cliffs that surrounded us. Suddenly, his voice changed to a tone of sadness.

“Then something happened,” he said. “No one really knows why, but people started to forget who they were. In their forgetting, they began to feel separate—separate from the earth, from each other, and even from the one who created them. They were lost and wandered through life with no direction or connection.

In their separation, they believed that they had to fight to survive in this world and defend themselves against the same forces that gave them the life they had learned to live in harmony with and trust. Soon all of their energy was used to protect themselves from the world around them, instead of making peace with the world within them.”

Immediately, the man’s story resonated with me. As I listened to what he was telling me, it sounded as if he were describing human beings today! With the few exceptions of isolated cultures and remote pockets of tradition that remain, our civilization certainly places its focus more on the world around us and less on the world within us.

We spend hundreds of millions of dollars each year defending ourselves from disease and trying to control nature. In doing so, we have perhaps strayed further from our balance with the natural world than ever before. The wisdom keeper had my attention—now the question was, where was he going with his story?

From the four-story-tall buildings and perfect stone kivas (round ceremonial structures) buried in the ground to the vast irrigation systems and the sophisticated crops that sustained the people, this place seems to have just appeared one day. And then those who built it were suddenly gone—they just vanished.

“Even though they had forgotten who they were, somewhere inside of them the gift of their ancestors remained,” he continued. “There was still a memory that lived within them. In their dreams at night they knew that they held the power to heal their bodies, bring rain when they needed to, and speak with their ancestors. They knew that somehow they could find their place in the natural world once again.

“As they tried to remember who they were, they began to build the things outside of their bodies that reminded them of who they were on the inside. As time went on, they even built machines to do their healing, made chemicals to grow their crops, and stretched wires to communicate over long distances. The farther they wandered from their inner power, the more cluttered their outer lives became with the things that they believed would make them happy.”

As I listened, I saw the unmistakable parallels between the people I was hearing about and our civilization today. Our civilization has become steeped in feelings of being powerless to help ourselves or make a better world. So often we feel helpless as we watch our loved ones slip away from us into the clutches of pain and addictions.

We think that we’re powerless to ease the suffering from the horrible diseases that no living thing should ever have to endure. We can only hope for the peace that will bring those we care about safely from the terror of foreign battlefields. And together, we feel insignificant in the presence of a growing nuclear threat as the world aligns itself along the divisions of religious beliefs, bloodlines, and borders.

It seems that the farther we stray from our natural relationship with the earth, our bodies, one another, and God, the emptier we become. In our emptiness, we strive to fill our inner void with “things.”

When we look at the world from this perspective, I cannot help but think of a similar dilemma portrayed in the science-fiction movie Contact. The President’s science advisor (played by Matthew McConaughey) explores the fundamental question that faces every technological society. During a television interview, he asks if we are a better society because of our technology—has it brought us closer together or made us feel more separate?

The question is never really answered in the movie, and the topic could fill an entire book unto itself. However, the point that the advisor is making—when he asks how much of our power we give away to our diversions—is a good one.  When we feel that video games, movies, virtual online relationships, and voiceless communication are necessities and they become substitutes for real life and face-to-face contact, this may be signs of a society in trouble.

While electronics and entertainment media certainly seem to make life more interesting, they could also be red flags telling us how far we’ve strayed from our power to live rich, healthy, and meaningful lives.

In such a mode, no one is truly happy—nobody really “wins.”

Hear the Rest of the Story!

Own The Divine Matrix

When we find ourselves living this way, the obvious thing to do would be to look for another route. And that’s precisely what the divine matrix is about and why I’m sharing this story.

“How does the story end?” I asked the wisdom keeper. “Did the people ever find their power and remember who they were?”

By this time, the sun had disappeared behind the canyon walls, and for the first time I could actually see who I was talking to. The sun-darkened man standing in front of me smiled broadly upon hearing my question. He was quiet for just a moment, and then he whispered, “No one knows because the story isn’t finished. The people who got lost are our ancestors, and we are the ones who are writing the ending. What do you think . . . ?”