The Mystery Of Phi

The Mystery Of Phi 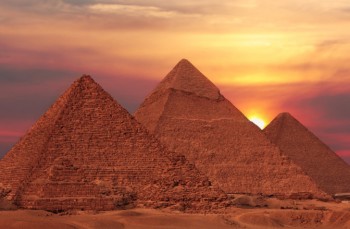 In January 1986, I walked onto Egypt’s Giza plateau for the first time. Towering into the sky above me was the marvel that represents one of the greatest unsolved mysteries in the history of our species and the monument that had fascinated me since the first time I saw an image of it as a child. I was standing at the base of the Great Pyramid.  It looked different up close, even more weathered and ancient than in the classic photographs that fill the pages of the travel guides. Although I should have been jet-lagged from the long flights and unexpected delays that it took for me to be in the shadow of the pyramid, I felt none of that in the moment. Immediately, I wanted to know more. How could such a mystery remain in the technological world of the 20th century? Who put it there? And how?

The Great Pyramid is one of those enigmas that seem to be a bottomless pit for questions. Rather than the traditional process of solving the puzzle by discovering facts, the more we know about this ancient mystery, the more we discover that we don’t know. But even in the light of all of the mystery, one fact about Egypt’s Great Pyramid has become abundantly clear: Whoever built it understood the power of the single number that seems to permeate life and form throughout the universe. It’s the same number that became the focus for one of the most successful mystery novels in history.

A Code That Exists Throughout The Universe

In Dan Brown’s best-selling novel The DaVinci Code, the main character, Robert Langdon, leads his students through the exploration of a powerful number—a code—that the ancients recognized as a constant that exists throughout nature and the universe. Using words that sound more like a reference to a magnificent work of art than a code to history’s greatest secret, Langdon states that the number, named phi (usually pronounced with a long i, like the word eye), is “generally considered the most beautiful number in the universe.”  While phi may be secretly encoded into the work of great masters such as Michelangelo and Leonardo da Vinci, it was certainly no secret to the architects of the Great Pyramid. The consistent accuracy of the pyramid’s construction leaves little doubt that the numbers and relationships used to build it were applied with great care.  The Great Pyramid is made of an estimated 2.3 million individually formed stones, some weighing up to 70 tons each. It covers 13 acres of native rock and is nearly perfectly level across the entire area (it’s believed that the structure was once exactly level and that the small variance seen today is due to shifting earth over the centuries). The pyramid’s height is 5,449 inches, the same number as the average height of the Earth’s landmass above sea level, and its location in Egypt is also the geographic center of the landmass for the planet.
With these facts in mind, we can be sure that the use of nature’s most beautiful number in the pyramid’s construction is intentional. It should come as no surprise, then, that the very dimensions that make this mysterious monument possible are due to the use of phi. A line drawn from the projected top (apex) of the capstone to the edge at the base of each face produces a measurement that is phi units.  The ongoing controversy over the age of the Great Pyramid gives such measurements an even greater significance. If the revised date for the building of the structure turns out to be older than the conventional theory of 2560 b.c., then it means that its builders not only had the advanced knowledge to create such a structure, but they also encoded it with the essence of the number that seems to govern much of the universe: the mysterious phi.

The Mystery of Phi

Phi is the number that we get when we compare one part of a “something” to another part of itself, after that something is divided in a very precise way. The result of the comparison is the ratio. While there are an infinite number of ways that something may be divided into two parts of different sizes, the one that the universe seems to favor has been recognized for hundreds of years. During that time, it’s been given names that vary, from the golden proportion and the divine ratio to the golden ratio. Although the names vary, the number they represent is always the same: Phi with an uppercase P is 1.618; and its close relative, phi with a lowercase p, is .618. Both are a form of the golden ratio.